Faction: Syndicate 7
Hitting Zenith Chemicals was not just another job for Paddy Doyle. A two-bit second-story man and all-around low-life, he just wanted to get rich and avoid dying, and didn’t really care for the rights and wrongs of the world. His debts had racked up with Mad Dog O’Shaughnessy and his biggest marker had been called in. Mad Dog offered a deal, Paddy could wipe his slate clan with one job – get into a well-guarded chemical laboratory and steal a sample of their new formula. It was dangerous, which was why it would wipe out twenty-large of debt.

Paddy worked the job up alone, wanting to get in and out with minimum fuss and no violence. Planning these kind of jobs was his forte. He brought in Jimmy the Wheels as his driver and was all set. Jimmy could be flaky, but Paddy needed a wheelman and a lookout, and Jimmy was his only option since he couldn’t afford anyone more reliable. 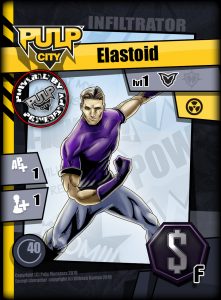 Paddy worked his way in as planned. He had mastered the security guard’s patrol pattern and isolated his window of opportunity. The alarm system was a breeze, and he had identified a route of quick egress for when he was done.

When Paddy reached the target lab, he bypassed the electronic locks using a card he had lifted from a worker who he had followed and who was careless with their I.D. in a local bar, just as he knew they would be. Everything had gone to plan.

Paddy approached a glass cylinder containing a roiling purple liquid. Setting to work he decanted it quickly into a cylindrical vacuum flask. He knew that whatever this stuff was, it wasn’t his boss that wanted it, it was surely on its way along a chain and he was the guy tasked to get it.

Suddenly Paddy felt something wrong. He turned abruptly to see Jimmy standing in the doorway, holding a gun on him.

“Sorry, Paddy”, began Jimmy, “But I am into the boss for ten large and I get to clear my own debts. He only loses ten gee himself, and you? Well you take the fall. Hand over the stuff.”
Paddy knew in that moment that Jimmy wasn’t going to let him live. The security guard’s rounds were five minutes out. He had few options and no gun.

The two men were ten feet apart, and Paddy had no weapons. His only chance was to take Jimmy by surprise and hope that desperation worked. He lunged towards Jimmy, but the wheelman was too quick, and he got a shot off. The bullet smashed through the flask and caught Paddy square in the chest. Jimmy panicked – he had no way of scooping up the chemical pooling across Paddy’s body. The wheelman ran like he had never run before.

Paddy heard footsteps coming closer as the guard ran to investigate then he blacked out. 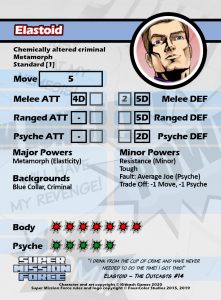 Doyle woke up in a hospital room with cops at his door and cuffed to the bed. He couldn’t get sent down; Mad Dog would have a shiv in his back as soon as he hit general population. Frantically Paddy tried to free his hand and as he did so something strange happened, his hand distorted and stretched, becoming rubbery. He slipped the handcuffs easily, the cops outside the room none the wiser. Testing a theory, he reached towards the fifth story window, stretching his arm all the way from the bed to the windowsill.

Climbing out of the hospital window, Paddy was able to lower himself all the way to the ground. He disappeared into the night, losing himself. Soon a new supervillain appeared on the scene, and the Elastoid started making headlines!

“I drink from the cup of crime and have never needed to do the time! I got this!”
Elastoid – The Outcasts #14