Lydia Grimalkin stared at the only patron in her shop. He was a man of medium build, medium height, bald and perhaps in his early thirties. The man perused a bookcase in a cramped aisle, oblivious to Lydia’s gaze. There was something that Lydia found very disquieting about him.

Hers was an unusual store, frequented only by those with an interest in the occult in any of its aspects. Grimalkin’s was a practical place where magic could be unlocked, but only by those with the will to unearth secrets bound within old dusty texts or antiquated charms and objects. 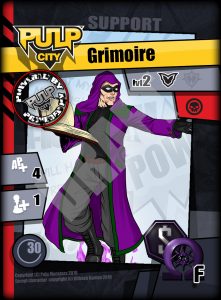 She was used to all manner of peculiar and macabre clientele. Most were gracious customers, and only a few were truly unsettling. Even those rough biker boys the Road Demonz did not disturb her equilibrium, simple creatures that they were. But this bald man was something else, searching for something deeper.

Lost in her thoughts Lydia gasped when the man dropped a leather-bound book onto her countertop. It was old, the cover cracked by age. She recognized it as a tome she had recently acquired from an old collection that had fallen through many hands. She had thought it mostly unremarkable save for its age, but now she could feel a tingling vibration of power. The book had chosen its reader.

Lydia wrapped the book in paper and string as the bald man counted out several hundred dollars, making no attempt to haggle. He wanted this book as much as it wanted him. She was thankful as he left the shop, a cold breeze creeping in as the only sign he had been there.

Months passed since he bought the book, and Daryl Jefferson remained largely ensconced in his small apartment, making only occasional forays to the store. He read passage after passage of spells, incantations, treatises on dark magic, and descriptions of things that lay beyond. With each day, Daryl was more certain that a code was unravelling before him as he made the connections seeded throughout the old manuscript. And through it all he heard a whispering voice saying, “Soon”.

A year passed by. Two. Daryl’s inheritance, which had sustained his study, had dwindled to almost nothing. He no longer heated the apartment and kept only a solitary light on as he continued to pore over those old, heavy pages. Exhausted, Daryl was on the verge of daily collapse. Sleep always beckoned but he fought against his tiredness. 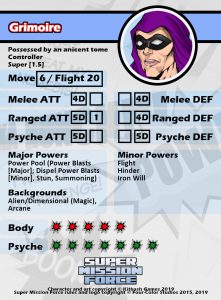 Eight hundred and eight days after he bought the book, Daryl stopped. It all made sense. He had deciphered its ultimate secret. He began to repeat over and over a chant, the words for which he had pieced together in his painstaking study.

The man who glided away into the night was no longer truly Daryl Jefferson, his mind was consumed. He clutched the old book, and from it he read words of power. The book was Daryl, its sentience had found a new host, and Grimoire joined the ranks of Empire City’s colorful supervillains.

“I am power that has watched cities burn and torn down civilizations. I am Grimoire.”
Grimoire – Tales to Terrify #123