Henry Harlan was a maverick scientist, specializing in entomology, genetics and biochemistry. His work focused on developing ways for humankind to mimic the capabilities of the insect world as a stepping-stone to cosmic exploration. However, each dead end he reached resulted in yet more ridicule from his peers. His papers were increasingly rejected, and his funding dried up. Eventually he was fired from Empire City University. 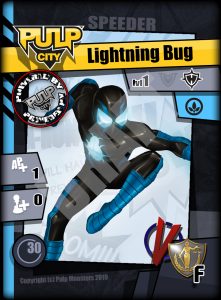 Dejected, Henry withdrew from science. His mortgage was soon foreclosed, and he returned to live with his mother. She encouraged him to focus on his goals. Henry angrily rejected his work as a failure. That is when his mother revealed the family’s greatest secret, that his late grandfather Hugo was also Insectman, the first member of the Vindicators to fall in the line of duty. Hugo had risked his life even with a young family, and he paid the ultimate price.

Mrs. Harlan took her son down to a secret sub-basement beneath the house. There they found Hugo’s equipment and research. Henry immediately set to work.

Despite Hugo and Henry’s mutual passions, Hugo had ultimately discovered that he was a latent Unhuman, and he used that knowledge combined with his own research to unlock amazing powers and become Insectman. Henry followed his grandfather’s test and discovered he too had dormant Unhuman genes. Building on Hugo’s research, Henry adapted his own work and experimented on himself.

Feverish days passed until he awoke, something more than he had been. However, Henry quickly learned that his powers were not identical to Insectman’s. Filled with a new purpose, Henry made himself a sleek costume and based on the bioluminescent ability he had acquired, called himself Lightning Bug!

After several solo adventures Lightning Bug crossed paths with the vindicators. When they learned of his connection to Insectman he was invited to join their ranks and was soon called upon to act as one of the liaisons between the Covenant and the Vindicators, serving part-time on both teams.

“There are people who wonder if I’m a monster. Maybe they’re half right. I fight monsters, and maybe I am the thing that scares them.”
Lightning Bug – Incredible Lightning Bug #16